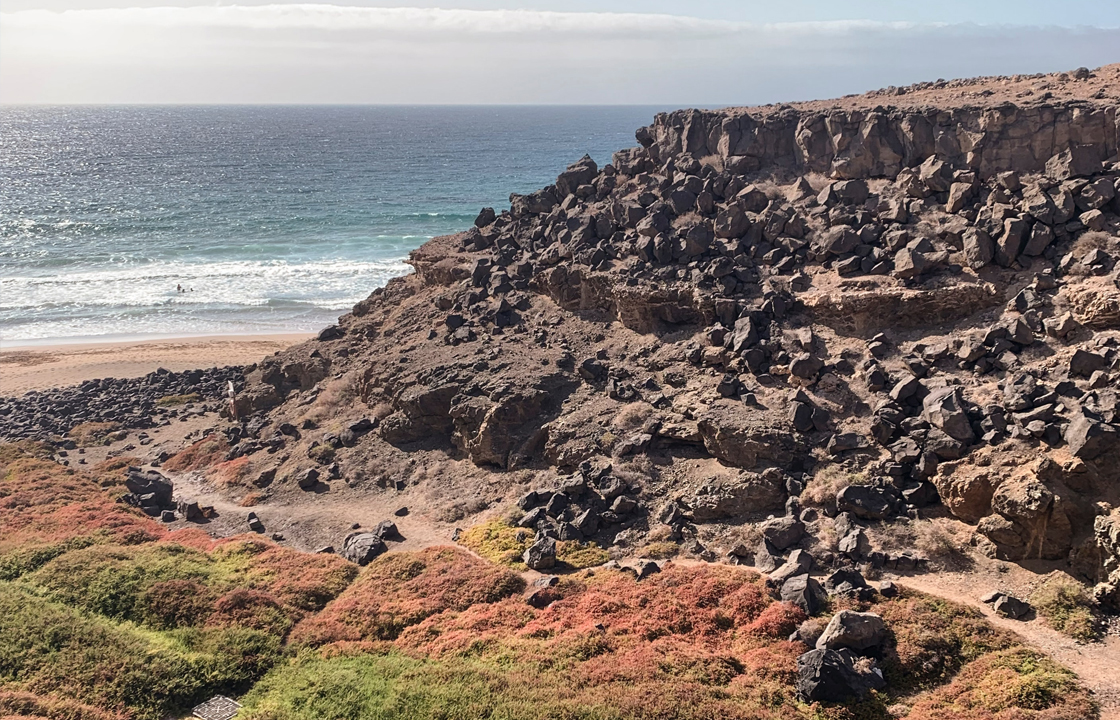 With an area of around 1,660 square km, Fuerteventura is the second largest of the Canary Islands. However, only around 116,000 people live here, which is just around 70 people per square km. The island is located in the Atlantic, about 120 km west of Morocco.

Fuerteventura is around 98 km long and around 31 km wide. The approx. 5-km-wide Istmo de la Pared divides the island into two parts: the northern main island of Maxorata, also called Majoreros, and the southern peninsula of Jandia. The capital is Puerto del Rosario (approx. 40,000 inhabitants) and is located in the north. At the northern tip of the island, near the village of Corralejo, you can see the famous shifting dunes – probably one of the reasons why the entire island of Fuerteventura became a UNESCO biosphere reserve in 2009.

The climate on Fuerteventura is very mild all year round. The island has no high mountains, so the clouds move over it; precipitation is only around 150 mm per year, which is pretty little. Plants need to be watered artificially. Overall, the island is very barren, in terms of landscape it is a semi-desert with a tendency towards desert. Due to the lack of water, very little agriculture can be done. Only aloe vera is grown on a reasonable scale on Fuerteventura.

Fuerteventura consists to a large extent of a steep coast, but especially the east and south of the island have some very beautiful beaches. The favorites are on the Jandia Peninsula; here the Playa de Esquinzo, the Playa de Jandia and the Playa Matorral merge. The beaches are a dream for young and old, however about 80 to 90 km from the capital Puerto del Rosario (about 1.15 hours). If the main reason for your private jet flight to Fuerteventura is sunbathing, then the best thing to do is book a hotel in the tourist south of the island – the choice is wide!

Due to the wind conditions, Fuerteventura is very popular with water sports enthusiasts: sailing, windsurfing, water skiing and jet skiing are very popular; swimmers and divers should find out about the currents in advance. In the interior of the island, hikers and cyclists will find what their hearts desire.

Whatever your preferences – your private jet experts from privatejet.co.uk will be happy to advise you in finding the right hotel for you. We are not only specialists for your next private jet flight to Fuerteventura, but are also happy to book hotels and transfers for you!