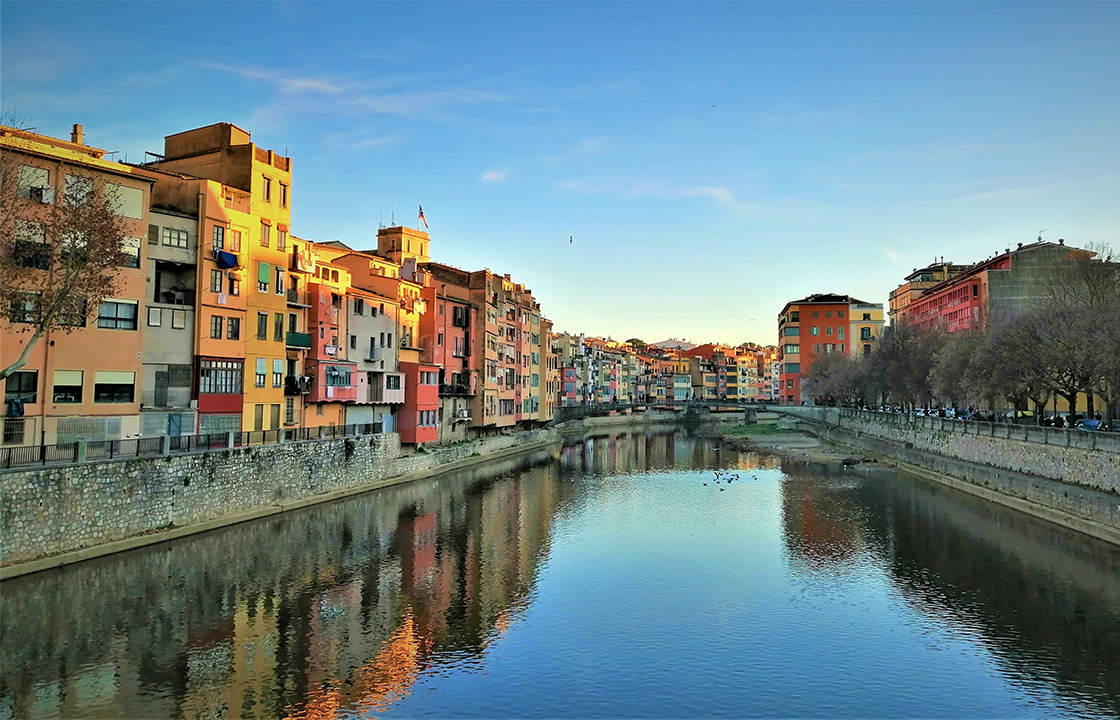 Girona is located in the easternmost tip of Spain in the autonomous community of Catalonia. France in the north is around 60 km away and the Mediterranean Sea in the south is around 40 km away. The city itself is not by the sea, but by four rivers: in addition to the 34-km-long Onyar (or Onar), which flows north of the center into the 208-km-long Ter, the smaller rivers Galligants and Guell are also here. The Iberians must have liked the location and founded Gerunda on this spot. Later came the Romans and then the Visigoths. In 715 Girona was conquered by the Moors, who ruled the city for three centuries with various interruptions before they were expelled from the area in 1015.

In the 11th century, King Alfonso I of Aragon granted Girona city rights. In the following century, Girona’s Jewish community flourished; the city developed into an important trading center. For more than three centuries, the Jews exerted great influence until, in 1492, the Alhambra Edict issued by the Catholic Kings gave them the choice of either converting to Christianity or leaving the kingdoms of Castile and Aragon – most of the Jews left. Today the Jewish Quarter is one of the best-preserved Jewish quarters in all of Europe and is an important tourist attraction.

Girona was besieged twenty-five times and captured seven times. In May 1809 around 35,000 Napoleonic soldiers stood in front of the city and steadfastly defied the siege for seven months. Plagued by disease and famine, the city fathers finally had to give up and thus surrendered on December 12, 1809. The French occupied Girona until 1813. At the end of the 19th century, the western part of the city wall was torn down to expand the city. The eastern part remained at first; it has deteriorated over the years, but has been reconstructed in recent years and is now a popular tourist destination known as Passeig de la Muralla.

Today Girona has about 100,000 inhabitants and is the capital of the province by the same name. In contrast to many cities in southern Spain, the area around Girona has a very blooming landscape. There are also numerous parks and green spaces in the city itself. Lovers of art and culture will get their money’s worth in the old town. The Cathedral, the Basilica, the Arab Baths, the Old University, the historic bridges over the Onyar – there is a lot to see in this beautiful city. The numerous sights, the good Spanish cuisine and the delicious Spanish wine make Girona the perfect tourist destination.

From London Luton there are around 1.133 km to Girona for which a private jet takes around two hours. From the terminal of the international airport Aeroport de Girona to the city center of Girona there are another 15 km (travel time depending on the traffic situation around 20 to 25 minutes). The nearest seaside resort, Lloret de Mar, is around 30 km or 40 minutes away from the airport. Regardless of whether you want to fly to Girona for business or private reasons and whether you want to book a city hotel or a beach hotel: We are happy to help you find a suitable hotel in the city or at one of the popular seaside resorts.