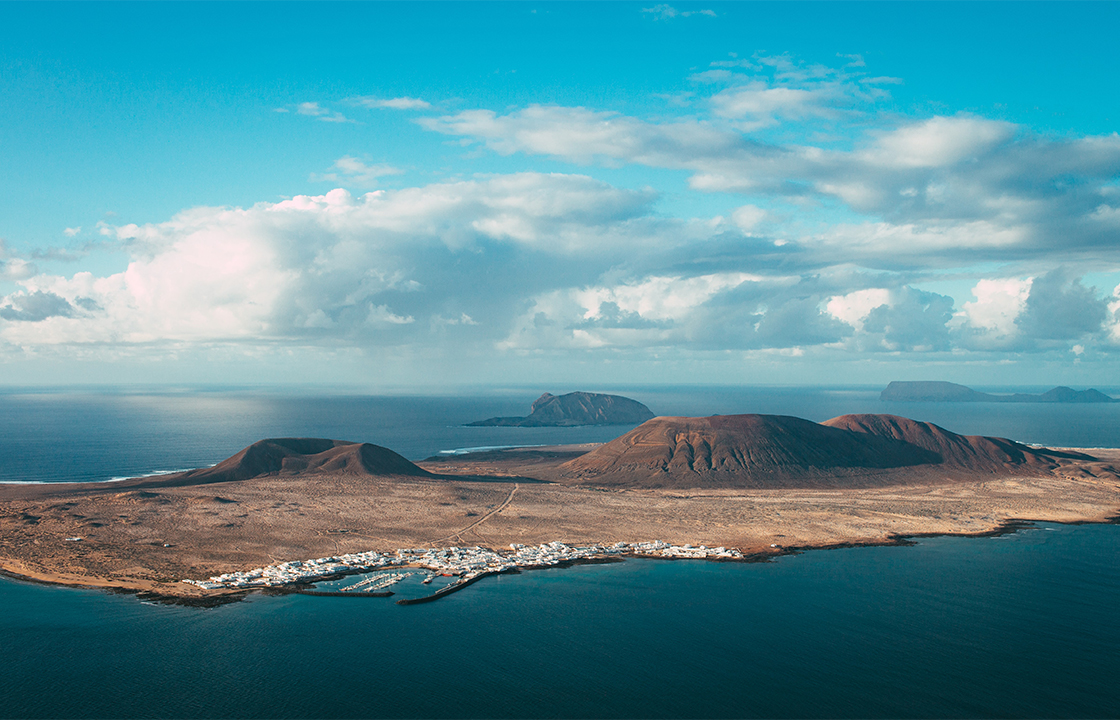 Lanzarote is the fourth largest of the Canary Islands and the northeasternmost. It is located about 140 km from Morocco in the Atlantic Ocean; there are around 1,000 km to the Spanish mainland. Lanzarote is 58 km long and around 34 km wide and has an area of around 846 square km.

The island is of volcanic origin. The striking volcanic cones can be admired all over the island. But no fear! The last major volcanic eruption occurred in 1824, therefore about 200 years ago. Overall, Lanzarote is very mountainous. In the north is the 671-meter-high Penas del Chache, in the south the Los Ajaches rises to 608 m. The island has around 213 km of coastline, but there are only about 10 km of sandy beaches and about 16.5 kilometers of pebble beaches.

About 163,000 people live on Lanzarote, around 63,000 of them in the capital Arrecife in the east of the island. The international airport Aeropuerto de Lanzarote-Arrecife is located around 7 km west of Arrecife. The distance from London Luton is about 2.774 km kilometers, for which a private jet needs about six hours; a taxi or limousine takes about 15 minutes to get to the old town of Arrecife. Book your private jet flight to Lanzarote and your transfer with the private jet professionals from privatejet.co.uk – the private jet experts will look after you!

Arrecife itself has largely retained its original character – the city is hardly influenced by tourism. Nevertheless, a hotel is the most striking sight in the city: the Gran Hotel & Spa, which opened in 1974, is one of the tallest buildings in the Canary Islands with 15 floors and a height of around 54 m. The hotel closed down in 1991 for economic reasons, burned down in 1994 and reopened in 2004 after extensive reconstruction work and renovations. To the south there is a small island with the Fortress Castillo de San Gabriel, which can be reached via a drawbridge. And to the west of the hotel is the city beach of Playa del Reducto. The private jet experts from privatejet.co.uk not only book a private jet to Lanzarote, but are also happy to book a hotel room for you – ask about it!

Tourist life on Lanzarote goes on mainly in the following three places: Costa Teguise with its beaches Playa de las Cucharas, Playa de los Charcos and Playa del Jablillo is the favorite with guests with high demands (northeast of Arrecife, about 16 km or around 20 minutes ride from the airport). The region of Playa Blanca with the beaches of Playa Blanca and Playa Flamingo is particularly popular with families (on the southern tip of the island, around 33 km or around 30 minutes from the airport).

The largest holiday resort is probably Puerto del Carmen with its approximately 8-km-long promenade and the beaches of Playa Blanca, Playa de los Pocillos and Playa Matagorda (in the south, around 8 km or ten minutes from the airport).