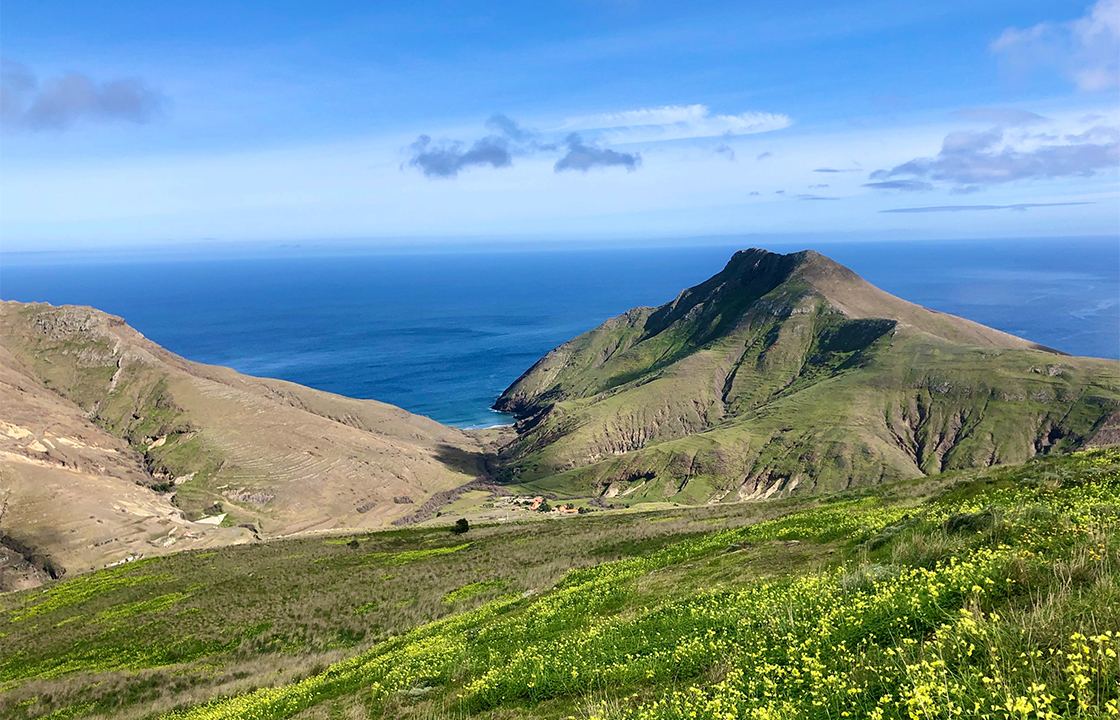 Island in the Atlantic Ocean

Porto Santo, the Holy Port, is an island in the Atlantic Ocean that belongs to Portugal. The island has a length of about 11 km and a width of up to 6 km and a surface area of about 42 square km. Of the approx. 5,500 inhabitants, around 4,200 people live in Vila Baleira; the place received city rights in 1996 and is therefore the capital of the island.

Porto Santo was rediscovered by the Portuguese in 1418. The sailors released a rabbit to find out if it survived. Since the rabbit was pregnant and there were no natural enemies on the island, the first settlers suffered from a rabbit plague a few years later. Porto Santo was very fertile and heavily overgrown, and the flat areas were suitable for livestock farming, so that the settlement of the island progressed well. Even today, Porto Santo is the meat supplier for the neighboring, much larger island of Madeira. In 1479 Christopher Columbus married the daughter of the governor and lived on the island for a few years. It can be assumed that it was here that he made the plans for his later voyages of discovery.

Due to its strategically suitable location in the Atlantic, between Europe, Africa and America, Porto Santo has repeatedly been the target of British and French attacks. To protect the island, a fortress was therefore built on the Pico do Facho, but it is no longer preserved today.

There are around 2.455 km km from London Luton to the international airport Aeroporto do Porto Santo. A private jet takes around five and a half hours to cover this route. There are about two km to the capital, Vila Baleira. You can walk or take a five-minute cab or limousine ride. The private jet professionals at privatejet.co.uk will find the right private jet for your flight to Porto Santo and will be happy to book a hotel or transfer for you.

The north of the island is a little higher and has a steep rocky coast. You won’t find a beach for swimming here. The same goes for the west. In the east there is at least one small beach, the Porto de Frades.

Now hold on tight – in the south of the island there is one of the most beautiful and longest beaches you have ever seen: Praia do Porto Santo. Anyone who looks out of the window during the flight landing approach and sees the beach wishes to take off their shoes as quickly as possible and walk around barefoot in the water! You can hardly miss it – Praia do Porto Santo is around 9 km long and thus takes up almost the entire south coast. The sand is golden yellow, the water turquoise blue, the dunes and the surf gentle. There are a few beach bars, otherwise Praia do Porto Santo is surprisingly quiet, even in high season.

Compared to other bathing islands, Porto Santo is still relatively little developed for tourism. The few hotels on the island are spread along the south coast. The restaurants serve mainly fish, which was often only freshly caught on the same day, and a delicious wine.

If you’ve got a taste for it, book your private jet flight to Porto Santo with the private jet professionals at privatejet.co.uk! The private jet experts will also be happy to find a suitable hotel and transfer for you. We are the specialists when it comes to private jets!