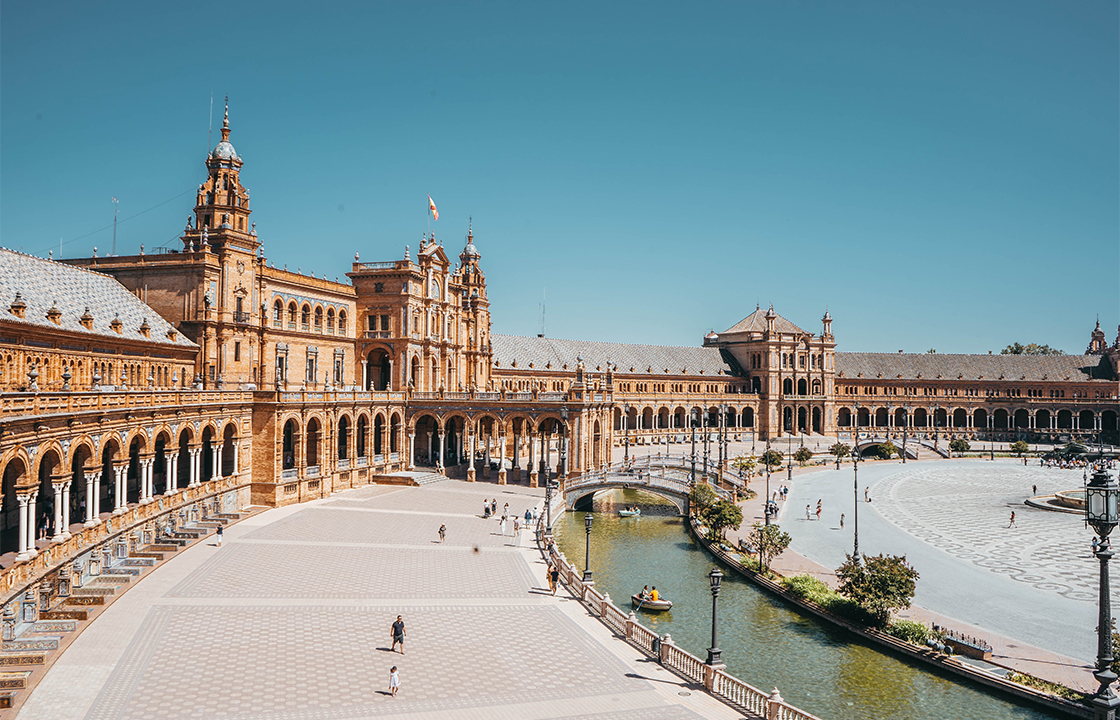 Seville was probably founded by the Phoenicians, a seafaring people who lived roughly in present-day Lebanon and had trading posts throughout the Mediterranean. The Phoenicians usually founded their cities on the seashore; in the case of Seville, it is the Guadalquivir River, which flows into a large inland lake near Seville, making this location a good natural harbor. The inland lake has now silted up, but the Guadalquivir is so deep and wide that river boats and smaller ocean-going vessels can still sail as far as Seville today.

In 45 BC Julia Caesar raised the city to Colonia. Hispalis, as Seville was called at that time, developed into one of the most important settlements in the province of Baetica, the forerunner of today’s Andalusia. After the fall of the Roman Empire, the rule changed several times. In 711 the Moors defeated the Visigoths; a year later they took Seville, made the city their provincial capital and named it Isbiliya, from which Seville was later derived. The Moors (and then the Abbadids, the Almoravids and the Almohads) traded diligently and brought the city a great deal of prosperity, which was also reflected in buildings such as the mosque, whose minaret is still preserved, or the Torre del Oro Fortification.

On November 23, 1248 Seville was conquered by Castile in the context of the Reconquista by the Catholic King Ferdinand III. Around 300,000 Moors left the area and moved to Granada or North Africa; with their departure, the city lost its position as an important trading post and lost significant economic power. It was not until the 16th century that Seville regained its original importance. At the time, the port of Seville had a monopoly on overseas trade. The discoverers Amerigo Vespucci and Ferdinand Magellan started on their voyages from here. Seville was the economic and cultural center of the colonial power of Spain.

Capital of the autonomous region of Andalusia

Seville is today the fourth largest city in Spain with around 700,000 inhabitants. It is the capital of the autonomous region of Andalusia and has an international airport. The Aeropuerto de Sevilla is about 1.664 km away from London Luton. A private jet takes about three hours to fly this route. There are around 12 km or around 20 to 30 minutes’ ride from the airport terminal to Seville’s Old Town, depending on the traffic situation. If you want to fly to Seville by private jet, then contact the private jet professionals at privatejet.co.uk! The private jet experts will be happy to book for you a private jet flight and a hotel in or around Seville.

Places of interest in Seville

We do not know whether you fly to Seville for business or private reasons. What we can tell you is: take your time – it’s worth it! Seville has one of the largest old towns in Europe. There are about 3 km from the Parlamento de Andalucia in the north to the Plaza de Espana in the south and the old town stretches around 2 km from west to east. In between there is a maze of narrow streets with countless tapas bars, restaurants and shops. Our hotel recommendation is in the midst of this hustle and bustle: The Unuk is a luxury class hotel with comfortably furnished rooms, restaurant, hotel bar, swimming pool, fitness studio and sauna – everything you need for a good stay!